Man, I was so happy, cruising through the Baltimore Symphony Orchestra’s 13-14 season. My beloved Nadja Salerno-Sonnenberg is doing the Shostakovich violin concerto: AWESOME. Itzhak mothereffin’ Perlman is back with his ABSOLUTELY BRILLIANT rendition of Beethoven’s Romance No. 1; as far as I’m concerned his is the only version that matters. Hell, they’re playing the score to Casablanca while screening the film! I love Casablanca! Here are your winnings, sir!

The philosophy of the second fiddle

This clip, a little segment of the movie A Late Quartet that explains the importance of each individual instrument in a string quartet, is great and vaguely philosophical and stabs at the heart of truth and all that good stuff. But I still can’t shake the urge to apologize for being unable to find anything where Christopher Walken talks about Beethoven.

Giving violas a week of rest

This Not A Viola Joke is sincerely dedicated to Jess Wyatt, for being such a gracious commenter. 🙂

Q. How many violinists does it take to screw in a lightbulb? END_OF_DOCUMENT_TOKEN_TO_BE_REPLACED

First, let me start out with a story that makes me out to be a bit of a pretentious twit, so that I can later make the mild accusation that others are pretentious twits without sounding like I’m speaking from a particularly high horse.

My family went to visit my grandmother in NJ for Mother’s Day, and as part of our activities we went to a local library to see an outreach performance by members of the New Jersey Symphony Orchestra. The program consisted of Broadway music, and the finale was a big ol’ Sound of Music medley. About a quarter of the way in, I was horrified when the audience started to sing along. Gauche! Unsophisticated! Mortifying! I cringed in my seat and later, once the dreadful experience was over, I inquired to my parents what they thought of this impromptu sing-along. “Well,” my dad said, “they invited us to sing along if we wanted.” Oh. I completely missed that bit. So I guess that was all right…

Now that I’ve pointed out my own folly, let’s talk about the concert itself. It was… pretty good. The musicians, members of a highly respected orchestra, were of course talented and played well. I commend them for volunteering to perform outreach such as this, and I wouldn’t be surprised to hear if they don’t receive any additional compensation for doing it. However, I wish to register some complaints, not to lambast the NJSO or these musicians in particular, but as a means of pointing out what I understand to be a common phenomenon: the phoned-in concert.

Item 1. The highlight was a snippet of Isaac Stern’s fancy violin solos from Fiddler on the Roof; the rest of the programming was very safe, gentle, and of the love song persuasion. Take the three selections from West Side Story: “I Feel Pretty,” “Maria,” and “One Hand, One Heart” (I think; I tend to mentally wander off whenever love songs happen). All extremely unchallenging, you know? How about a fiery rendition of “America”? How about the tense, jazzy “Cool”? An even keel can get boring, guys. Change it up a little.

Item 2. The group was a trifle unprepared. On two separate occasions, the cellist – who, it should be pointed out, was the best of the bunch – could not find his music and once had to run backstage to get it. The violinist forgot to turn off his cell phone. They both played these things off charmingly and it made for some laughs, but this sort of thing wouldn’t go down in a concert hall.

Item 3. Riffing off the unprepared thing, there were some intonation problems, especially in the violinist, as well as some general group issues. The aforementioned “I Feel Pretty” was particularly sloppy.

I discussed this with my mother, who is the Fount of Classical Knowledge in all things, and she noted that this was not an isolated incident. She then recounted seeing a well-regarded cellist perform a Shostakovich piece at a small, outreach-style concert, and commenting to a music teacher friend that she was surprised how unpolished his performance was. “Oh, no,” replied the music teacher. “That’s normal. He probably barely practiced for it. They tend to phone that kind of thing in.”

Interesting. So. Here’s the big question: Why? Where’s the cut off? Not to rag on the NJSO, but let’s break it down with their example. Was it because they were performing simple little Broadway tunes, and pfffft, who cares about Broadway? Was it because they were performing in a library in central NJ, and pfffft, who cares about the hicks in central NJ?* Was it because it was free, and/or they performed for free? Did they not make the program themselves, recognize it as a bit boring, and therefore not feel the need to put in the practice time? Or maybe it was because they only found out about their performance yesterday and didn’t have time to sufficiently prepare even if they wanted to?

I’m sorry, NJSO. You guys were really good. I’m just saying: it was clear that you could have been much, much better. Not that it’s just you, anyway. And I’m wondering why. Anybody have thoughts on that, either as an audience member or a performer? When does one phone it in?

* Not to suggest that central NJ is full of hicks. I have lots of family in NJ! I’ll defend it! Except the jughandles, which are STUPID. What’s up with the jughandles, Jersey?

This is NO time for music

Do you know where I was yesterday? Walt Disney World.

This real world is dark and cold and unfriendly and I DON’T LIKE IT.

And in honor of my sadness, my bitterness, my loneliness, my desolation, here’s a sad and bitter video from the esteemed Louis CK.

(Don’t worry; I’ll be posting a photo roundup like usual! From Walt Disney World. Where I currently am not. SIGH.)

Awww, poor violists. Week after week we berate them here, and why? Because it’s funny, that’s why. But I do think it’s important to let all sides explain themselves, so on this day meant for sweetness, we shall check in on how the other half lives. I went straight to the source: my friend Elizabeth, who is (gasp!) a violist. GUEST POST!!!! I said to her, and she obliged, entitling her essay “Sense of humor required.”

I wanted to play the violin.  You had three options at my elementary school: violin, viola, or cello.  Cellos were too big and bulky for my taste, and what the heck was a viola, anyway?  When I told my mother, however, she told me she thought it would be better if I chose a less popular instrument, so I “would get more individual attention.”

I don’t know who suggested this idea to my mother, but it actually backfired.  It turned out there were so few students who chose viola or cello, that they combined us into one class, which meant that our instructor had to divide his time between teaching two instruments during a single period.  I stuck with it, though: it turned out playing an instrument was kind of fun, and eventually everyone but me dropped out and I was the only viola.  At this point I realized the true, often-overlooked appeal of being a violist: very often, you end up first chair by default.

Of course, there’s much less prestige linked to be first-chair violist, and you have to put up with a lot of jokes.  In fact, the word processor I’m using to type this doesn’t even recognize “violist” as a word, and asks if I meant “violinist.”

And yes yes, I know about the whole stigma about violists only being second-rate violinists who couldn’t make the cut, and switched to an instrument where no one cared if they sounded terrible.  This was not my experience, however.  In fact, since I often represented the entire viola section in my school orchestras, my mistakes were that much more obvious.  I was never an excellent player, but I did take pride in knowing that my directors depended on me to complete the orchestra.  My high school orchestra director sometimes referred to me as the “sherpa,” which I suppose was meant to me a compliment, and it was true that no matter how well I played, I was never going to get to play the melody or stop having to explain what my instrument was (a viola? isn’t that like a miniature violin?).

So if I could go back and explain to my 8-year-old self why she should choose the viola over the violin, I’d tell her that at least she’ll get to sit close to the conductor.

Thanks, Elizabeth! Certainly your insights are witty, well-put, and valuable. I’m going to keep posting viola jokes, of course, but all the same, well done, you! Happy Valentine’s Day, everybody. 😉

Can I get a venti violin, please?

Or maybe they’re all guitars. 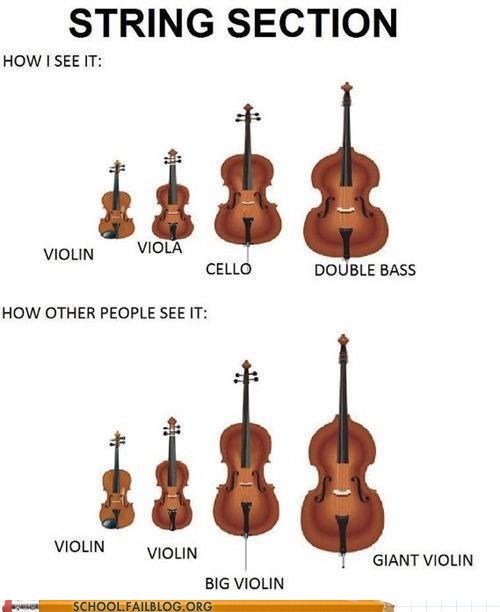