This tag is associated with 41 posts 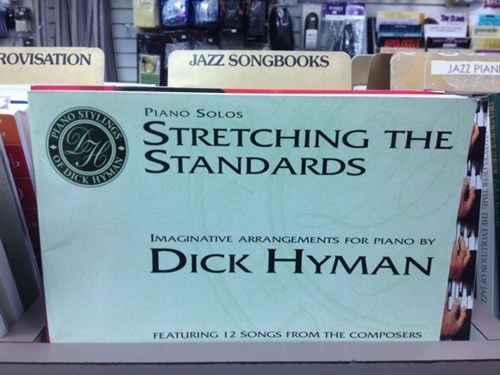 An elephant never forgets how to play the piano

If only Saint-Saens had seen this. Carnival of the Animals could have been so much more LITERAL.

The Concert Roundup Will Be Represented by the Flute

A piece for one hand (and an umbrella)

I mean, sometimes you’re twenty-seven measures in and ya gotta sneeze, ya know?

Would you please for God’s sake hold still?!

Have I mentioned this before? I can’t remember. Anyway, in high school I had a violin teacher who gave me a big ol’ lecture about how I was far too staid in my performing style. He wanted drama! He wanted me to stamp my foot and toss my head and wave my violin around in the air. None of this was remotely within my personality, but he insisted it was vital to giving a good performance, not only to engage to the listener’s visual senses, but also to enhance my own visceral feel for the music.

I can only assume that this particular speech is popular among music teachers, because I see so many performers positively flailing on stage, or engaging in completely unnecessary histrionics. I once saw a pianist who began every piece by lifting her shoulders, throwing back her head, taking what was clearly a VERY VERY DEEP BREATH, raising her hands hiiiiiiiiiiigh over the keyboard, AAAAAAAND… hunching over the piano as she began to play. By the beginning of the third piece I wanted to put her in a straitjacket.

At least she was a soloist. I find it particularly distressing when members of an orchestra wave their arms around like they’re seizing. I once pissed off Hannu Lintu by expressing my displeasure with his particularly physical conducting style. I realize the conductor heads the orchestra, but that doesn’t mean he should distract from it. And oh Lord, does the principle violinist of the Baltimore Symphony Orchestra drive me nuts sometimes. He, too, is of the sway-and-swoon school of music performance, and I DO NOT LIKE IT.

Okay, sometimes I DO like it. I adore Nadja Salerno-Sonnenberg largely because of her stomps and forceful pulls of the bow across the strings, in a fight she’s winning. But here, I think, is the difference: her antics have always struck me as an expression of fun. She is enjoying herself up there. By contrast, the vast majority of the theatrics I’ve witnessed seem to communicate little more than what a seeeeeerious undertaking the musician has taken on. Oh, music is SO HARD and I must THROW MYSELF INTO IT because I just feel so much DRAMA. My soul is in PAIN, damn it, PAIN, and I want you to know!

Oh, shut it. You love what you do. If you’re dealing with a particularly twiddly bit, a frown of concentration will do it, thanks. This is not about you. This is about the music. And if it’s causing you such emotional angst, maybe you should see a therapist.

So, whaddya think? Do you agree that musicians tend to heavily toward theatrics when they play? Or am I totally off base here? Certainly there are exceptions to every rule – tell me about them!

It’s so hard to face an empty piano bench

Somebody posted a link to this video on Twitter (was it you? I bet it was you!), but the original link’s embed code wouldn’t work. Luckily I was able to dig it up on YouTube, and with Spanish subtitles, no less! Now you can improve your language skills while pondering why it’s so hard to face an empty page, and it’s so hard to face an empty piano bench.

For the full video in one piece, check it out here.

Okay, stop me if I’m being crazy here, but: is it lonely playing the piano?

No, no, I have a thought process. See, the thing that every once in a great while I almost miss enough to start playing an instrument again is the feeling you get, as part of an orchestra, of being inside the music. Surrounded on all sides by fellow musicians, together creating this great swelling sound, and you live there together. Certainly you don’t get this feeling as a soloist or practicing, but at least as kids growing up playing music in school, most of us had that experience – part of the musical group.

Look, I’m not saying that we’ve purposefully ostracized the pianists, or that anyone’s tried to keep them out. And of course they have their own parts in full orchestra pieces, piano concertos and the like. But they’re not integrated much, are they? You call on the pianist as an accompanist or for a bit part in a random piece that calls for a couple chords and then they go away for the rest of the concert. Meanwhile the piano kid is handed piano scores and etudes to handle alone.

It’s not the same as the Great Schism of Band and Orchestra – once you get out into the big, scary world, the two come together again in the Symphonic Orchestra of Healing. It seems the pianist always inhabits a world of solos and backups, like an understudy in the Justice League. “You’re definitely important here, Devil’s Triad, but we really don’t need your particular skills right now. We’ll call you when we’ve got something that requires both hands.” (Devil’s Triad is my superhero name, in case you were wondering.)

I’m not speaking as an insider here – I switched from piano to violin in the fourth grade – but this is my perception of things. Pianists, you can give it to me straight: is it lonely playing the piano?