You know how much I love Fantasia, right? Like, really love it? A lot? Okay, now that we’ve established a baseline, HOW COOL IS THIS?!

On a completely different and much less impressive note, I would now like to do something I haven’t done in quite some time: award a Medal of Violar. Tom Sharpe has been commenting on posts with his own puns, quips, and bad jokes, and that’s the kind of can-do spirit we here at Ain’t Baroque like to see. And we here at Ain’t Baroque consists of a girl and two cats who are also girls, so you know we’re hard to impress. Mr. Sharpe, please let me know how you would like your medal engraved, which is to say, how you’d like to be listed on the Medal of Violar page.

Video Week: “This disturbed me so much”

Guess what?! I didn’t really post this video just now! Guess why?! I’m actually on vacation this week! Guess where?!

I’m not at Walt Disney World, which frankly confuses me. How does one vacation outside of a Disney park? Wait, you mean vacations are supposed to be relaxing? And spreadsheet-free? I don’t… I don’t know how to respond to this…

Well, if loving WDW is wrong, I don’t want to be right, clearly. But I’m giving this whole “Myrtle Beach” thing a shot. I’m really not sure how I’ll handle not having a schedule, but… I get to wear my Esther Williams swimsuits while searching the horizon for shark fins with a heart full of hope, so I guess that’s something? I might even tweet about it!

Anyway, in the spirit of the whole “chill vacation” thing (so you’re saying you’re supposed to chill on vacation? Interesting…) I won’t be keeping up with this blog at all this week. Instead, I’ve scheduled for your viewing pleasure a bunch of videos to keep you occupied in my no doubt agonizing absence. They’re just as good, if not better, I assure you.

To kick things off, here’s a video Medalist of Violar Rebekah sent me recently, accompanied with the title comment as well as other gems like “Maybe this is what the audience felt when hearing The Rite of Spring for the first time” and “I can’t watch it again. It’s too frightening.” Helluva great endorsement, no?

But seriously… are you even allowed to vacation outside of a Disney park? This doesn’t seem right… See you tomorrow for more video fun!

P.S. Check out the BSO, NSO, and Strathmore websites to see what they’re up to this week. Don’t want them to get lonely. 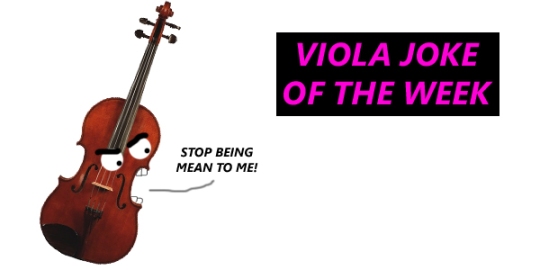 Once again I am deeply indebted to @Kickassical, Medalist of Violar and national treasure. I wonder if he knows he overpaid?

Beethoven does not appreciate lies

I made the above image for my bloggie birthday. It is some of my finest work, I think, and as such I think it deserves a place on merchandise. Perhaps you might be interested in a tote bag for your sheet music? Or a sheet of stickers for your instrument case and music folder? A magnet for your fridge? A mug would make a great present for your music teacher. Think about it. (I can put it on other things too, but I went for the less expensive items.)

Which is a great segue into the main topic of this post; namely, how will Ain’t Baroque grow as it enters its third year of existence? Well, I want to try to expand the store, for starters, in conjunction with my new blog layout, which benefits greatly from pictures. Sometimes I’ll need to create those images myself, and the good ones can go into the store. Let me know if there’s anything in particular — a hoodie, a postcard, a travel mug — that would interest you.

Oh, right, the new layout! I implemented it last night, and so far the reaction has been positive. I still have some work to do, but I’m relatively happy with it. I also purchased the domain name, so aintbaroque.com will work for you.

Oh, and one last order of business — I would like to award the indomitable Chris McGovern a coveted Medal of Violar for his consistent support and commentary. Mr. McGovern, you are much appreciated. Check your bad self out on the wall of (dis)honor!

So there you are. Where is the cake?

Time for a tune-up; also Medal of Violar nominations

AB is approaching its second birthday, and I’m embarking on a series of improvements — including new stuff for the AB store, a site re-design, and other tweaks. I went with the vague “other tweaks” instead of something more precise because I haven’t yet decided what these tweaks will be. You have to tell me what they’ll be.

Over the next couple of weeks, I’ll be putting up some polls now and again asking you to tell me about your AB experience. Please do answer them so that I may continue on my undying quest to make you happier every day. I promise they’ll be easy!

The first one is below, but first: in honor of our second Baroquen year, I will award up to three Medals of Violar on the blog’s birthday. Nominate a friend or yourself! You have until October 22. All you really need to provide is a name, but your nominee will stand a better chance of winning if you offer an explanation. Go!

Violists are such prudes

I was alerted to today’s joke by Medalist of Violar @Kickassical. It is slightly risque, so if you’re all offended you should direct your complaints to him.

Q. What’s the difference between a violist and a prostitute?

END_OF_DOCUMENT_TOKEN_TO_BE_REPLACED

No more calls; we have our winners

Last week I asked you to submit nominations for a Medal of Violar recipient. This week I award two — one reader-nominated and one me-nominated. Because I can.

The reader-nominated winner is Daniel’s cat Gir, because when I suggested you nominated your pets I was mostly joking and he went there anyway. Well done, sir, well done. Says Daniel: “My cat, Gir, likes to sing along with Amanda and myself when certain songs are playing.  For example, we can be playing Rockband 3 and she’ll walk onto our laps and meow and paw us in the face.” Congratulations, Gir! Maybe Daniel will engrave you a new tag to commemorate the occasion.

The me-nominated winner is Mr. Stephen P. Brown, conductor extraordinaire who can always be counted on to chime in on discussion posts with a well-thought-out reply. He last popped up responding to my post about my dislike of children’s classical music programming, but he has made many excellent comments. Thanks for your readership and replies, Mr. Brown (Can Moo. Can You? Sorry, I couldn’t help myself)!

Congratulations! Of sorts! Your names will be added to the wall later today. Thanks to all my readership — keep reading, submitting, and commenting, and you, too, may one day be the proud recipient of a Medal of Violar. And then you can buy yourself a mug! I like to encourage people to dream big, y’know.

I can see just fine, thanks!

Winner to perform national anthem with BSO at Oregon Ridge

“O, Say Can You Sing” the national anthem with the Baltimore Symphony Orchestra? Capitalizing on American Idol’s appeal among local tweens and teens, the BSO announces its fourth annual singing competition, “O, Say Can You Sing?” Contestants will vie for the chance to sing the national anthem alongside the BSO in front of thousands at the BSO’s annual Star-Spangled Spectacular concerts held at Baltimore County’s Oregon Ridge Park, July 2-3.

The competition is open to singers age 8 to 18. Sarah Jacobs from the 106.5 FM JoJo, Reagan and the Mix Morning Show will serve as celebrity judge alongside BSO staff members and local singing experts. Auditions will take place by appointment only on Thursday, June 2 from 3 p.m. to 6 p.m. at the Joseph Meyerhoff Symphony Hall.

Each year, more than 60 contestants audition for the chance to sing the national anthem alongside the BSO. Last year, Baltimore School for the Arts student Scott AuCoin and former Miss Maryland Outstanding Teen Stephanie Meadowcroft snagged the coveted positions. These gifted youngsters not only performed with the BSO, but were also featured on several local TV and radio programs.

PLEASE NOTE: Audition times will be assigned on a “first come, first served” basis, by appointment only and parental permission (signed waiver form) will be required for all contestants under the age of 18. Contestants must be able to sing the “Star-Spangled Banner” in the key of B-flat major (F is starting note) or A-flat major (E-flat is starting note) along with an accompanist provided by the BSO. All entrants must be available for performances on both July 2 and 3, 2011. Registration deadline is 11:59 p.m. on Monday, May 30.

I encourage all you student-types to go out for this. Heck, put your kid in there — no worries if he can’t sing; humiliation builds character, right? And if you do audition/have your kid/niece/cousin/whatever audition let me know! I want to a) get an interview and b) know who to root for.

Oh, and regarding the Medial of Violar contest from yesterday, you have until Monday, April 25 to get your entries in.

An honor, I guess?

It’s a holiday week, there’s no BSO concert, and I feel like being generous. I want to give someone a Medal of Violar.

I’ve made some attempts in the past that were not well received, I think because I was asking the potential recipients to do some work. 😛 Well, you’re still going to have to do some work, for yourself or on behalf of somebody else, but it should be fairly simple. Tell me who deserves a Medal of Violar, and why.

The best answer as I see it wins. You have to make a legitimate case — you’re not going to sell me on your dog unless you can explain to me how musically enriching and into this blog he is — but you can nominate anyone you like. If you CAN sell me on your dog in that regard, he’s eligible! And I’d be impressed. Does he want to be my mascot?

Entries may be accepted in comments, via email (although I’ll be publishing the winner and potentially finalists, so if you go email don’t think you’re keeping it between us), through a tweet, or on Facebook.

The winner goes on the wall! And can buy themselves a mug. Or something. Honor and glory await!

I have two St. Patrick’s Day presents for you!

The first one – I once suggested that Northern Ireland-born James Galway butches up the flute. This to me is no small thing, as the flute is one hell of a girly instrument. Don’t get all uppity at me; you know it’s true! And since Mr. Galway makes it manly, should it not be he rather than Chuck Norris who is considered the paragon of all that is masculine?

Therefore, today I invite you all to contribute your own Galwayisms, either via comment or Tweet (tag ’em with #jamesgalwayisbutch). Here, I’ll start:

James Galway doesn’t buy his flutes. He pulls them out of rocks, supervised by Merlin.

Okay, so that wasn’t very good. I’ll work on it (further efforts will be tweeted). I’m sure you can top me, though — the author of my favorite has a Medal of Violar in the offing.

Here is the second one. YOU’RE WELCOME.