This tag is associated with 22 posts

You’ll need extra jazz if the winter is long 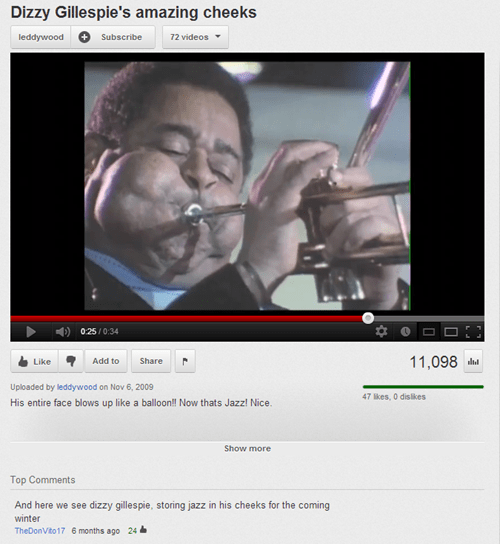 “How does he make an embouchure? He’s a chicken!”

“Jazz was the maggot-infested flesh of a dead body”

I read an article the other day on Cracked.com called “The 6 Most Baffling Science Experiments Ever Funded,” and, naturally, #6 on the list was entitled “Coked-Up Rats and Jazz.” Apparently some scientists decided to try playing silence, jazz, and Beethoven to rats to see what they liked best. Destroying all the faith you ever had in the humble rat’s taste in music, they liked silence the most, but if it’s any consolation, of the remaining choices they much preferred the Beethoven. (Maybe it was smooth jazz?)

Then comes the bit where it gets baffling: the scientists took another stab at it, literally, by repeating the experiment after first injecting the rats with cocaine. And then the rats loooooooooved jazz.

You can draw your own conclusions on that particular experiment, but if you’d like to poll other rodents before making any pronouncements, here’s David Sedaris enlightening us on what squirrels and chipmunks think of jazz, respectively.

I know this is a lot to get through. If you get hungry later, I have beef jerky.*

* This is an inside joke with my IRL friends and you can feel free to ignore it. And/or wish you knew me IRL so that you, too, could enjoy off-handed comments about dried beef.