This tag is associated with 90 posts

You Can’t Stop the Concert Roundup

We interrupt your regularly scheduled LOL Friday/Monday Video/Tuesday Whatever The Hell I Want to bring you three more music gifts while there’s still time to get them delivered by Christmas. After that I will resume posting my usual ridiculousness, as opposed to this unusual ridiculousness.

Okay, I admit it; the theremin I suggested last week was a little expensive. I can make it up to you now, I promise:

Musical wine glasses! And at $65 for what appears to be two wine glasses, it’s a LOT cheaper than the theremin, although admittedly kinda expensive for wine glasses. But look, these wine glasses are special – they’re musical!

Along the side they’ve helpfully printed note markers, so if you want to tink your fork against you glass and hear a D natural, you simply fill the glass to the D natural marker and go to TOWN on that boy. Line up a couple and recreate that scene from Miss Congeniality! Find them at Firebox.

Still not cost-effective enough for you? Not a problem – check out the Ain’t Baroque store, fine purveyor of Beethoven stickers (you did notice that it was his birthday yesterday, right?), terrible music puns, and Russian composer cows.

I’m not sure who this “Dominic Cooper” fellow is, and I’m not sure I like him all up in my Ludwig. 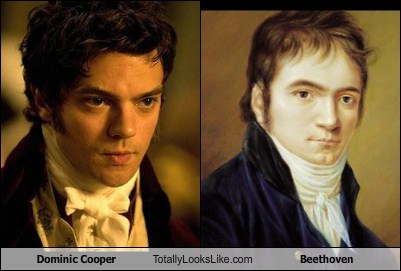 Concert Roundup in Many Flavors

Happy Halloween! You know what’s really scary? Not having your concert attendance for the week all planned out. Here ya go: