A sport and an instrument – well done, gentlemen. Now aren’t you glad your mothers insisted on you being well-rounded? 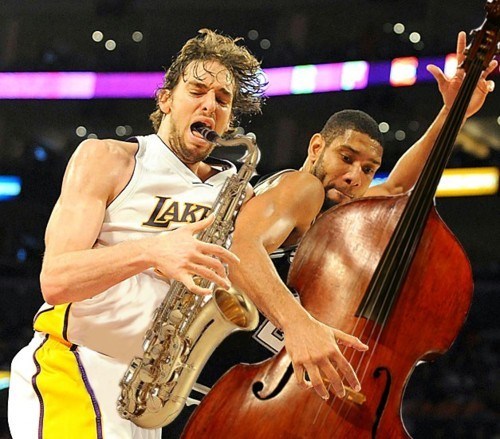 Q. What’s the different between studying the viola and using a chainsaw? END_OF_DOCUMENT_TOKEN_TO_BE_REPLACED

A Concert Roundup in Times Square

First, let me start out with a story that makes me out to be a bit of a pretentious twit, so that I can later make the mild accusation that others are pretentious twits without sounding like I’m speaking from a particularly high horse.

My family went to visit my grandmother in NJ for Mother’s Day, and as part of our activities we went to a local library to see an outreach performance by members of the New Jersey Symphony Orchestra. The program consisted of Broadway music, and the finale was a big ol’ Sound of Music medley. About a quarter of the way in, I was horrified when the audience started to sing along. Gauche! Unsophisticated! Mortifying! I cringed in my seat and later, once the dreadful experience was over, I inquired to my parents what they thought of this impromptu sing-along. “Well,” my dad said, “they invited us to sing along if we wanted.” Oh. I completely missed that bit. So I guess that was all right…

Now that I’ve pointed out my own folly, let’s talk about the concert itself. It was… pretty good. The musicians, members of a highly respected orchestra, were of course talented and played well. I commend them for volunteering to perform outreach such as this, and I wouldn’t be surprised to hear if they don’t receive any additional compensation for doing it. However, I wish to register some complaints, not to lambast the NJSO or these musicians in particular, but as a means of pointing out what I understand to be a common phenomenon: the phoned-in concert.

Item 1. The highlight was a snippet of Isaac Stern’s fancy violin solos from Fiddler on the Roof; the rest of the programming was very safe, gentle, and of the love song persuasion. Take the three selections from West Side Story: “I Feel Pretty,” “Maria,” and “One Hand, One Heart” (I think; I tend to mentally wander off whenever love songs happen). All extremely unchallenging, you know? How about a fiery rendition of “America”? How about the tense, jazzy “Cool”? An even keel can get boring, guys. Change it up a little.

Item 2. The group was a trifle unprepared. On two separate occasions, the cellist – who, it should be pointed out, was the best of the bunch – could not find his music and once had to run backstage to get it. The violinist forgot to turn off his cell phone. They both played these things off charmingly and it made for some laughs, but this sort of thing wouldn’t go down in a concert hall.

Item 3. Riffing off the unprepared thing, there were some intonation problems, especially in the violinist, as well as some general group issues. The aforementioned “I Feel Pretty” was particularly sloppy.

I discussed this with my mother, who is the Fount of Classical Knowledge in all things, and she noted that this was not an isolated incident. She then recounted seeing a well-regarded cellist perform a Shostakovich piece at a small, outreach-style concert, and commenting to a music teacher friend that she was surprised how unpolished his performance was. “Oh, no,” replied the music teacher. “That’s normal. He probably barely practiced for it. They tend to phone that kind of thing in.”

Interesting. So. Here’s the big question: Why? Where’s the cut off? Not to rag on the NJSO, but let’s break it down with their example. Was it because they were performing simple little Broadway tunes, and pfffft, who cares about Broadway? Was it because they were performing in a library in central NJ, and pfffft, who cares about the hicks in central NJ?* Was it because it was free, and/or they performed for free? Did they not make the program themselves, recognize it as a bit boring, and therefore not feel the need to put in the practice time? Or maybe it was because they only found out about their performance yesterday and didn’t have time to sufficiently prepare even if they wanted to?

I’m sorry, NJSO. You guys were really good. I’m just saying: it was clear that you could have been much, much better. Not that it’s just you, anyway. And I’m wondering why. Anybody have thoughts on that, either as an audience member or a performer? When does one phone it in?

* Not to suggest that central NJ is full of hicks. I have lots of family in NJ! I’ll defend it! Except the jughandles, which are STUPID. What’s up with the jughandles, Jersey?

Holy bejeezus, guys! Turns out I know the prelude to Das Rheingold!

I know, I know, that’s THREE videos down there, which is, oh, one hell of a time commitment, but seriously, guys, watch it. I was showing my parents some Victor Borge clips I’d found last night, and they told me about Anna Russell, and I looked this up and HAHAHAHAHAHAHA, that’s all I’m saying, y’know? And by the way, she’s your aunt.

All that stands between acoustic and electric is time

And to think – nothing separates Handel and some sweet guitar licks but the centuries.

The truth is stranger than fiction, or at least more amusing – as demonstrated by this true story told by my mother.

I think I told you Scotty [my brother] got into a summer orchestra festival in the Napa Valley of CA. We asked Mr. Field about getting his viola on the plane as carry on. [BSO principle violist and his Peabody professor] Field said that you have to just say it’s an expensive violin. If you say it’s a viola, you’ll have to explain what it is and they might give you trouble. They are used to letting violins in the overhead compartments. TSA will make Scotty open the case to make sure it’s not a mafia machine gun, but what are the odds that one of those agents is going to say “Aha! You lied to me. It’s a viola, not a violin!”

Composer Cagematch! Round 2: Webern vs. Hindemith

Well. I don’t know if there’s a general prejudice against composers who are still alive or what, but they don’t seem to be doing very well. First you let Steve Reich go down, and then you voted Webern in waaay ahead of Boulez. Interesting.

So congratulations, Webern, but don’t get to comfy – you’re going right back into the ring! And so in this corner, he puts the “ton” in Anton! It’s

And in this corner, he doesn’t let being a violist stop him! It’s

They’re both dead, so this might be a little harder for you.

A piece for one hand (and an umbrella)

I mean, sometimes you’re twenty-seven measures in and ya gotta sneeze, ya know?