Seriously, you have NO IDEA how much time I have spent in my life sitting in the driveway, waiting to find out if I’ve guessed the composer right. (Answer: probably not.) 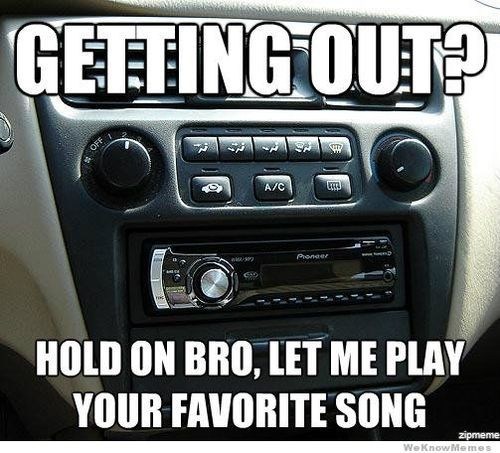 Giving violas a week of rest

This Not A Viola Joke is sincerely dedicated to Jess Wyatt, for being such a gracious commenter. 🙂

Q. How many violinists does it take to screw in a lightbulb? END_OF_DOCUMENT_TOKEN_TO_BE_REPLACED

Every single music teacher I have ever had, from third grade orchestra to tri-county symphonic orchestra, has given the exact same speech before a concert. Oh, I don’t mean the exact same entirely; there are riffs and variations based on the pieces played, and the state of them in rehearsal. But they always throw this one out:

Don’t worry about making mistakes – no one in the audience will know if you mess up!

I understand that they are not try to claim that, should the first chair bassist crunch his bow into the strings and make a distressingly low screeching sound in the middle of a pianissimo violin solo, no one will know the difference. What they are saying is that, should we botch a minor tempo or get a little out of sync, the audience is unlikely to notice, because what do they know from classical music?

This reassurance has never, ever, ever worked for me, and here’s why: 99% of the time, my mother was in that audience. AND SHE KNEW. She is a classical music aficionado and, were the violas off or our allegros a little too allegro, SHE KNEW. And she would tell me afterward. As in, “That bit was wrong.”

Which was fine, actually – it made for for honest feedback, which I much prefer to blind praise. And anyway, it made those times when she was impressed much more meaningful. However, it also rendered the pre-gig rallying cry of the conductor completely pointless.

A couple weeks ago, when we talked about phoning it in, it was mentioned that one of the reasons that’s such a bad idea is because there is always someone in the audience who knows. Doesn’t matter where you go.

School band and orchestra directors, this applies to you too! And so I make this recommendation to you: find a new trope. You’ve definitely got the right idea, attempting to give your musicians a pre-concert boost, but hit us with something true. There is someone in the audience who KNOWS.

Incidentally – music directors of all types, tell me! What do you say to your ensemble before you go on?

“How does he make an embouchure? He’s a chicken!”

Needless to say, chromatic was not one of them

Q. Did you hear about the three violists who put together a book of scales? END_OF_DOCUMENT_TOKEN_TO_BE_REPLACED

A Concert Roundup, Where We Lay Our Scene

Composer Cagematch! Round 2: Cage vs. Williams

So… you guys really like Hindemith, eh? I mean, Webern was fresh off a solid victory. He had tasted blood once before. And yet Hindemith cheerfully trounced him. Very, very interesting, you guys. I shall note it in the logs.

Now let’s head back to the homeland with an All-American match, because in this corner, he never gave Reich a chance! It’s

And in this corner, he made Jerry Goldsmith phone home! It’s

Oh my God, guys, it’s a John Fight! I didn’t even consciously plan that!

I didn’t realize it was an either/or proposition

Roundabout origin story for this post: I wanted to find something about the great Jimmy Stewart’s taste in classical music, because happy birthday, Jimmy Stewart! But I couldn’t. What I DID find was a clip of Mickey Rooney and Judy Garland explaining, among other things, that you may like opera or you may like swing but you may NOT LIKE BOTH. As far as I know it’s not either of their birthdays but it will have to do. Hit it, kids!

Good Morning – Stereo – Opera vs. Jazz – Where or When – Judy Garland and Mickey Rooney from Great Movies on Vimeo.