Would you please for God’s sake hold still?!

Have I mentioned this before? I can’t remember. Anyway, in high school I had a violin teacher who gave me a big ol’ lecture about how I was far too staid in my performing style. He wanted drama! He wanted me to stamp my foot and toss my head and wave my violin around in the air. None of this was remotely within my personality, but he insisted it was vital to giving a good performance, not only to engage to the listener’s visual senses, but also to enhance my own visceral feel for the music.

I can only assume that this particular speech is popular among music teachers, because I see so many performers positively flailing on stage, or engaging in completely unnecessary histrionics. I once saw a pianist who began every piece by lifting her shoulders, throwing back her head, taking what was clearly a VERY VERY DEEP BREATH, raising her hands hiiiiiiiiiiigh over the keyboard, AAAAAAAND… hunching over the piano as she began to play. By the beginning of the third piece I wanted to put her in a straitjacket.

At least she was a soloist. I find it particularly distressing when members of an orchestra wave their arms around like they’re seizing. I once pissed off Hannu Lintu by expressing my displeasure with his particularly physical conducting style. I realize the conductor heads the orchestra, but that doesn’t mean he should distract from it. And oh Lord, does the principle violinist of the Baltimore Symphony Orchestra drive me nuts sometimes. He, too, is of the sway-and-swoon school of music performance, and I DO NOT LIKE IT.

Okay, sometimes I DO like it. I adore Nadja Salerno-Sonnenberg largely because of her stomps and forceful pulls of the bow across the strings, in a fight she’s winning. But here, I think, is the difference: her antics have always struck me as an expression of fun. She is enjoying herself up there. By contrast, the vast majority of the theatrics I’ve witnessed seem to communicate little more than what a seeeeeerious undertaking the musician has taken on. Oh, music is SO HARD and I must THROW MYSELF INTO IT because I just feel so much DRAMA. My soul is in PAIN, damn it, PAIN, and I want you to know!

Oh, shut it. You love what you do. If you’re dealing with a particularly twiddly bit, a frown of concentration will do it, thanks. This is not about you. This is about the music. And if it’s causing you such emotional angst, maybe you should see a therapist.

So, whaddya think? Do you agree that musicians tend to heavily toward theatrics when they play? Or am I totally off base here? Certainly there are exceptions to every rule – tell me about them!

I’m not sure if this is vicious commentary, poor self-placement, or some combination thereof. 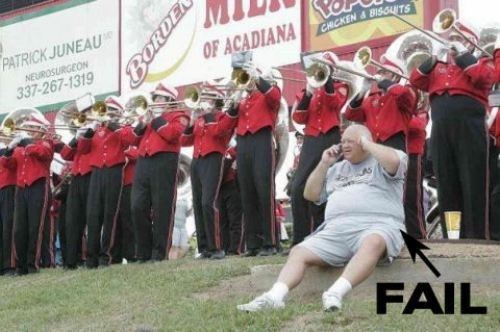 Q. What makes the viola a divine instrument? END_OF_DOCUMENT_TOKEN_TO_BE_REPLACED

Good morning, campers! It is finally nice and warm outside, which is significantly improving my outlook on life and subsequently allowing me to forgive you for letting Hindemith best Vaughan Williams even though the latter was holding a cat and therefore clearly should have won. Sheesh. I can’t believe you guys didn’t pick up on that. But ah well; let bygones be bygones. Let’s try this again, shall we?

Maybe you thought the last match was pretty darn modern. Well, b-b-b-baby, you ain’t seen nothing yet, because in this corner, clap your hands! It’s

And in this corner, SHHHHHH. It’s

Let’s see. John Cage is a legend of weirdness, with his moments of silence and his crazy dance scores and his chance music. Then you’ve got Steve Reich, was his minimalism and his clapping and his pendulums and my God is there a lot of innovation of up in this match!

And so, Ain’t Baroccos, I ask you: of these two composers who were/are alive in your lifetime, who do you love?

It’s so hard to face an empty piano bench

Somebody posted a link to this video on Twitter (was it you? I bet it was you!), but the original link’s embed code wouldn’t work. Luckily I was able to dig it up on YouTube, and with Spanish subtitles, no less! Now you can improve your language skills while pondering why it’s so hard to face an empty page, and it’s so hard to face an empty piano bench.

For the full video in one piece, check it out here.

Quick! To the bass signal!

Notice that, meanwhile, the violists are wearing the masks of super-villian henchmen. 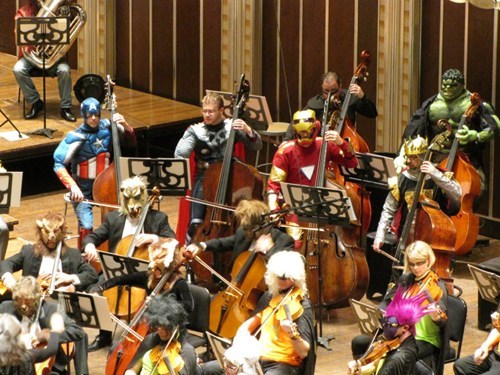 You mean it’s not just a really big violin?

Q. How many violists does it take to screw in a lightbulb? END_OF_DOCUMENT_TOKEN_TO_BE_REPLACED

I DEMAND TICKETS TO EVERYTHING.