I don’t understand why those chihuahuas won’t join in the chorus. 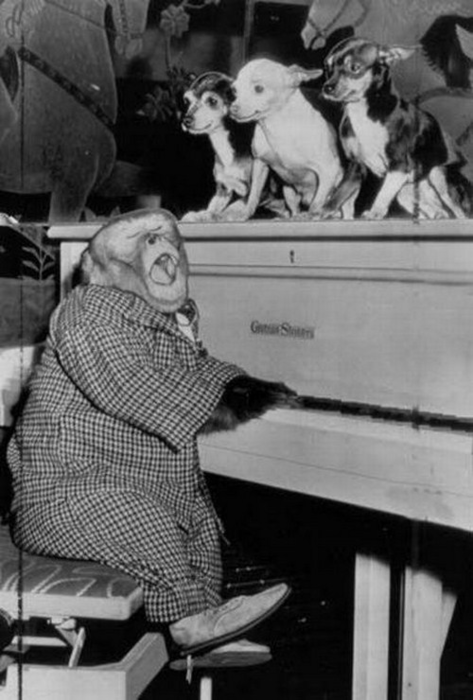 Q. Who’s better off in a snowstorm: a violinist or a violist? END_OF_DOCUMENT_TOKEN_TO_BE_REPLACED

A light load, what with Easter and all.

Well! That was interesting!

See, I thought you’d all be like, “ADAGIO FOR STRINGS!!!!” with a vengeance and Barber would skip off with the round, but indeed no – Ives crushed him. Maybe you all enjoy making pianists yodel as much as I do? Regardless, Ives advances!

And now we turn our attention to the next match, in which we shall straddle both sides of the Atlantic at once, because in this corner, he’ll beat you with five variants! It’s

And in this corner, oh, Susanna! It’s I’m staying well out of this one, as I have a bias against one of the composers that is not entirely his fault. I shall say simply this: do not let the fact that Vaughan Williams is holding a cat sway you. Clearly that makes him a clever and wise man, but we’re judging music here.

I think I hear a ghost

My grandmother doesn’t see very well, and as such one of her favorite pastimes when we’re together is to request that I look things up one my iPhone. During my visits we’ll watch old movies, and she’ll say “Look up when this person died” or “I wonder if he was ever in anything else; look that up.” So I fire up the browser app, head over to Wikipedia, and find out.

Our most recent sojourn was through The Sound of Music, and as the first nuns appeared I remembered that Marni Nixon got some actual screen time in the film, as Sister Sophia. You know about Marni Nixon, right? She was the ghost singer to the stars, working for Audrey Hepburn, Deborah Kerr, Natalie Wood, and Marilyn Monroe, among others.

Curious about her current whereabouts I looked her up of my own accord, and was fascinated to discover that she recorded vocals for such great composers as Schoenberg, Webern, Copland, and Bernstein. I had no idea! Unfortunately I couldn’t seem to locate any real footage of these performances, but I did find this fascinating interview, wherein she talks about how she just dubbed as a means of paying for her singing classes, and more. Find out what it was like for classically trained singer back in the day, where if they found it you dubbed, you were finished!

And now for an installment of People You Didn’t Expect to Hear from Here.

The drawbacks of child locks

Q. Did you hear about the time the string quartet went to a gig and the violinist accidentally locked his keys in his car? END_OF_DOCUMENT_TOKEN_TO_BE_REPLACED

At least read until you get to the bit with the condoms.

Dilemma! If you’re crawling through the dessert and come upon a glass harmonica, is it destructive to drink from it?