I convinced my friend Elizabeth to be Schroeder for Halloween! Is that awesome, or is that awesome? The Halloween party we attended was on Saturday, so at the time it was 48 days until Beethoven’s birthday, but I have corrected this for accuracy today.

Perhaps you are thinking, “I don’t remember Schroeder wearing an expression of blank yet homicidal rage.” Well, initially Elizabeth was smiling adorably. “No,” I corrected her, “Schroeder isn’t smiling! His expression is one of pride!” So she gave me Pride Demon. That girl has old-fashioned sass.

I wasn’t musically costumed, myself, but I’m so proud of it that I’m going to share it with you all the same: 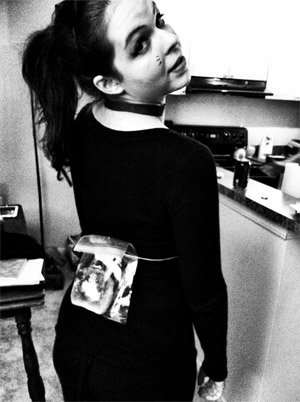 That’s right — I’m the buttered cat paradox. I know, I know, I just reached the level of super known as duper. Don’t worry, you’ll get used to it.

Have you ever noticed how serial killers tend to be really cultured?

I wasn’t sure if I could get away with posting this video, since it’s technically a “part 1” and only the first two minutes are relevant — and also the film has been flipped, I’m guessing for copyright reasons. But then I thought, I’m posting this as the Halloween video in the hopes of planting a seed of discomfiture. Why not make it even more unsettling by pretending that the cellos are way the hell over there and the flutes takes their cues from Jimi Hendrix and the conductor is left-handed?

Ah, yes, the flutes. Tonight, in between trick-or-treaters, I want you to ponder the fact that while you’re on stage, safe among the other members of the symphony, there may be a serial killer watching you. And if you make a mistake, he may notice.

Last year I posted a spooky playlist for your Halloween pleasure, suitable for trick-or-treating, costume parties, and general pursuits of fright. It went over pretty well, so here it is again — only BETTER, because it’s augmented with additional suggestions. Let me know if you have any to add yourself!

See? See?! I told you it happened! Mind you, I told you almost two years ago, but all the same. Let us not waste vindication. (That’s a good link to click if you still haven’t decided on a Halloween costume. I’m pretty sure I’ve convinced one of my friends to do it, too!)

What was I saying? Oh yes; I was right about Schroeder’s sign:

Okay, calm down. Here it is.

Q. What is the range of a viola?

END_OF_DOCUMENT_TOKEN_TO_BE_REPLACED

We interrupt your regularly scheduled program…

Don’t worry; you’ll get your viola joke later today. I just wanted to put this up first to make sure I didn’t forget.

Remember Benevolent Dictator Jamie, my benevolent dictator while I was interning at the BSO? Well, she’s working for the Smithsonian now, and the other day she sent me some awesome news to share with you: not only does the Smithsonian feature some awesome classical concerts inside the museums, but there is now a student program that nets you tickets for $10. Just wave your student ID around and you’re good to go.

This weekend you can choose between the Smithsonian Jazz Masterworks Orchestra at the Natural History Museum and the Axelrod String Quartet at the Museum of American History. If you don’t live near D.C. maybe you should take a moment to reflect, ponder why not, and move. Learn more and see it!

Beethoven does not appreciate lies

I made the above image for my bloggie birthday. It is some of my finest work, I think, and as such I think it deserves a place on merchandise. Perhaps you might be interested in a tote bag for your sheet music? Or a sheet of stickers for your instrument case and music folder? A magnet for your fridge? A mug would make a great present for your music teacher. Think about it. (I can put it on other things too, but I went for the less expensive items.)

Which is a great segue into the main topic of this post; namely, how will Ain’t Baroque grow as it enters its third year of existence? Well, I want to try to expand the store, for starters, in conjunction with my new blog layout, which benefits greatly from pictures. Sometimes I’ll need to create those images myself, and the good ones can go into the store. Let me know if there’s anything in particular — a hoodie, a postcard, a travel mug — that would interest you.

Oh, right, the new layout! I implemented it last night, and so far the reaction has been positive. I still have some work to do, but I’m relatively happy with it. I also purchased the domain name, so aintbaroque.com will work for you.

Oh, and one last order of business — I would like to award the indomitable Chris McGovern a coveted Medal of Violar for his consistent support and commentary. Mr. McGovern, you are much appreciated. Check your bad self out on the wall of (dis)honor!

So there you are. Where is the cake?

Today Ain’t Baroque is two years old, and with age comes wisdom, yes? So for the past couple of weeks I’ve been pondering my mission.

As you may have read, this blog was begun as the cornerstone of my thesis for my arts management masters; at the time I was interning for the Baltimore Symphony Orchestra, and I centered a large chunk of my content around the BSO. When the project ended, I found that I enjoyed having this forum, and so I carried on.

Sadly my official association with the BSO came to an end last year, and as such the my direction has had to evolve. I still mention the BSO quite a bit, but I have — out of necessity and desire both — shifted the focus. And I have wondered — what is AB for? *

To educate? No; I like to think that I dispense interesting factoids here and there, but I am not a professional musician, musicologist, or otherwise qualified for such a goal. To promote? Kind of, but I have found that the posts that prove most popular are the ones where I ramble on about my own opinions.

That is my answer, I think — I am here to think about classical music and how it has shaped my life, and in so doing, ask you to do the same. And because my approach is whimsical by nature, well, irreverence it shall be!

I hope you like it. I hope you’ll stay on, and encourage others to join the party. I hope you’ll ponder my queries and add your own stories. Because I love doing this, and I’d love to do more of it — but I can’t without you. I seem to recall saying this before, but I still believe it to be true: a blog cannot exist within a vacuum.

Bee tee dubs, do you like the new layout? Hang tight, because I’ll be posting a State of the Blog address later today.

* Did you know that there’s actually no grammar rule that forbids ending a sentence with a preposition? Thank God, because sometimes the “proper” way sounds twisted and weird.

Hey, guess which blog has its second anniversary tomorrow? No, no, you have to guess.

While you’re thinking, here are this week’s concerts:

No, I mean the group has a clever title. If “A clever title” is also a clever title for the post, then what we have here is exponential cleverness, and we must tread carefully.

Has anyone heard any really good street musicians lately?